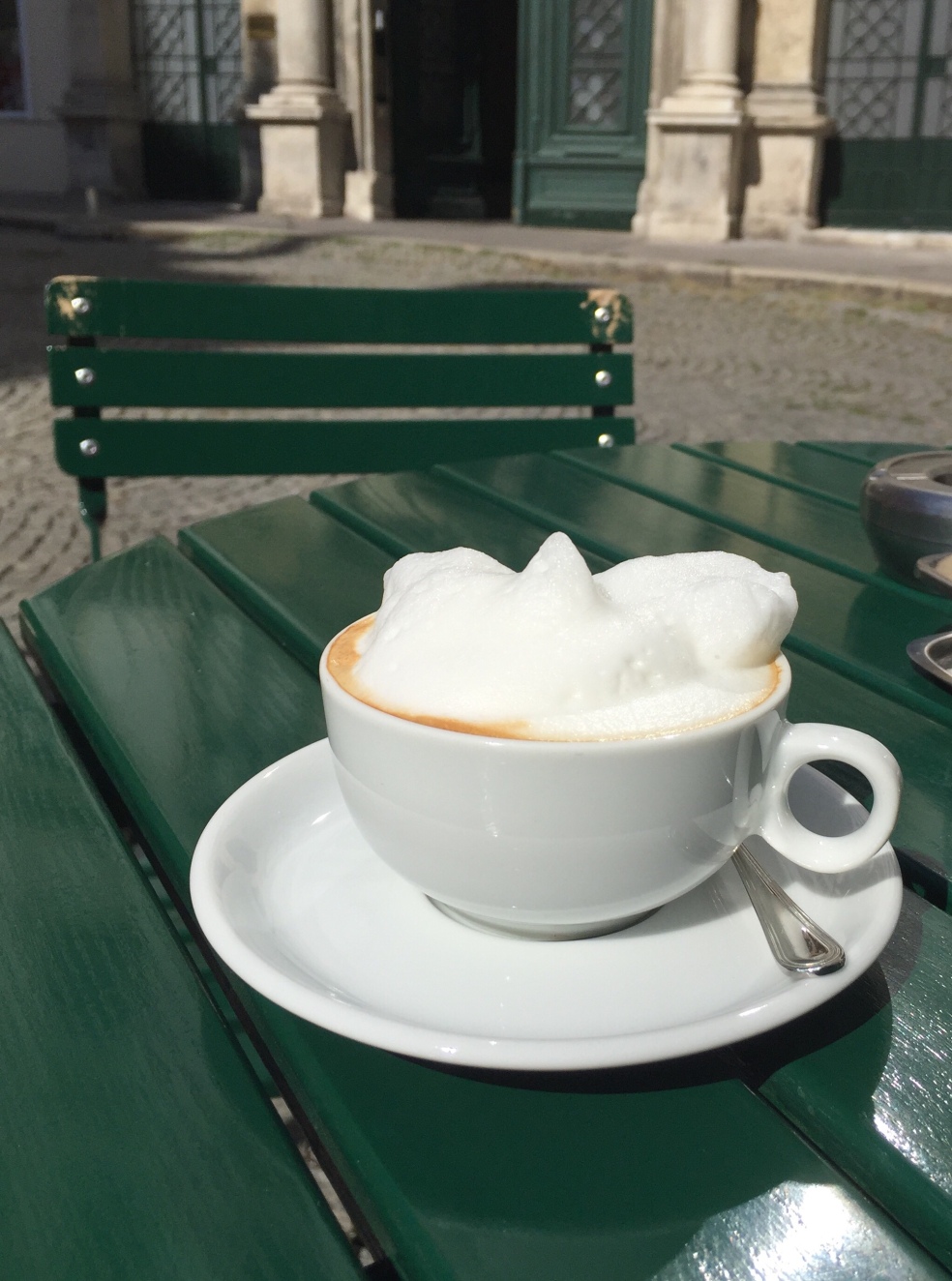 One of the things I love to do on Shirleyfest is connect with interesting new people in my host city. When preparing for my Vienna trip, the Hotel Sacher came up numerous times in my research. The Sacher Torte is a well known invention of that hotel. 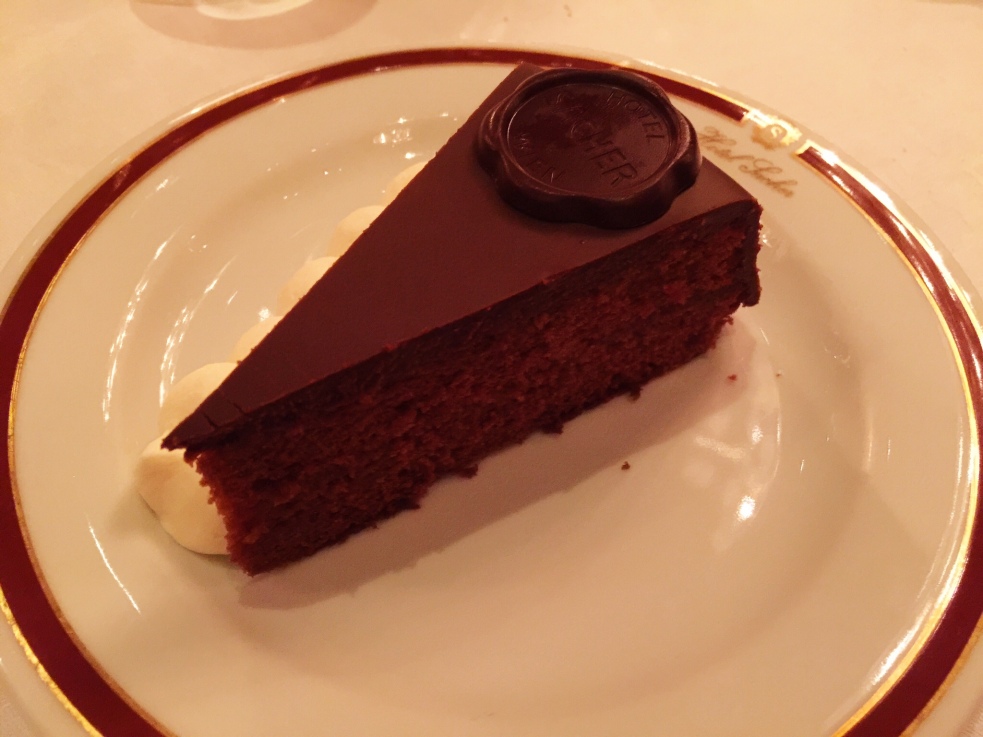 I decide to email Mr. Buchmann to see if would meet me and share his thoughts on Vienna. He quickly responds to my email saying he would be delighted to meet me and we arrange a time that I will come by the hotel. A few days later, I am standing in the lobby of the Hotel Sacher and in walks a charmingly handsome man and says, “You must be Shirley.”

Wolfgang is a man who smiles easily and is so gracious. After meeting me in the lobby, he asks if I wanted to have coffee at the hotel or walk to the Naschmarkt. To the surprise of no one, I say let’s walk. It is a beautiful sunny day in Vienna. We walk and talk easily. He tells me his background at the hotel and about his family who he adores. Wolfgang has been a concierge for 34 years. He is 59 years old and he started at the world famous Hotel Sacher when he was 18 years old. He worked there for several years and then went off to run a restaurant for a while. He then came back to the Hotel Sacher and has been there ever since. We find a sunny outdoor spot at one of the many restaurants in the Naschmarkt. Wolfgang graciously has the waiter bring us two Weiner Melanges— the local drink of Vienna and his favorite.

Of course we must have sparkling water, as well. Wolfgang is nothing if not civilized. We admire the people and the market. He tells me he met his wife many years ago because she also worked at the reception desk at the hotel. They have been married for 31 years, and from the way he talks, I can tell they are not just spouses, but best friends and confidants. He proudly tells me about his two daughters, ages 26 and 31. One works in the travel agency business and the other is going back to school to be a teacher. The market is bustling by now and I feel like we have known each other for a long time.

I ask him how things have changed over the 34 years. He tells me that technology has been one of the major changes. He recalls when there was a big debate about whether to add a fax machine at the hotel. After much consideration, they decided to add just one fax machine. They didn’t want to be seen as overly modern and there was dissension because some people felt why did you need a fax machine when you had a telex and the telephone. He tells me that when the first computer came into being at the hotel, it had a very small screen and was viewed with dubious eyes by his then boss. He confides that the boss had the first shift at the hotel and when Wolfgang would come into work in the afternoon he looks and sees that none of the emails has been answered. When he asks his boss about that, his boss says “ I don’t want to touch any of the buttons on that machine.” This means that Wolfgang has to answer all of the emails during his shift. Another big change Wolfgang notices is that with several of the hotel clients, he will be asked for his suggestion on something and when he gives it, the client will put quickly the information into his mobile device or iPad and say yes that is a good suggestion. Wolfgang says he finds it interesting, since he knows the city very well and also knows the client and what the client would like to do, yet the client also is relying upon the generic “Tripadvisor” or “Yelp” for confirmation. Ever the understanding professional, Wolfgang is not in the least bit offended. He embraces change and finds the humor in people as we all learn how to interact with each other during changing times.

Another thing that has changed through the years is the global nature of travel. Wolfgang says that there are people staying at the hotel from many many countries now and that new and different types of people are introduced to him almost on a daily basis. He has a goal when he encounters someone who is not smiling or happy to at some point during the stay get them to laugh or smile. He says his mantra is they must love their partner, their children or parents so at their core is love, it just has to find a way of making it to their face. Seeing Wolfgang’s smiling face on this sunny day, I realize those guests have no option but to smile.

Before we walk back, since Wolfgang loves my idea of Shirleyfest, I ask what he would do with a one month stay in Vienna if he was free to do as he pleased for 30 days. He has lots of interesting ideas. One is the Cemetery of the Nameless. Since 1840, that cemetery would bury the bodies mostly of people fished out of the Danube but also those that had committed suicide and were refused burial by the churches. Most of the graves have black iron crosses with a silvery crucifix. Every year on All Saint’s day local fisherman honor the unknown dead in a small ceremony by floating a raft on the Danube inscribed in three languages.

Among other things, he also would go to Palais Lichtenstein in Vienna and make a day trip to Baden and to the Wachau region. He gave me two tips for restaurants: Neni restaurant in the Naschmarkt and the Reinthaler Gasthaus. Being a good student and knowing great advice when I hear it, I managed to go to many of the places Wolfgang suggested.

This is the Palais Lichtenstein, owned by the princely family of Liechtenstein. It is amazing Baroque architecture with Rococo Revival interiors It is situated in a beautiful park used by the local community on a regular basis.

Baden was an easy trip by train and a short walk into town when I arrived. It is a spa town with the Baden baths being the focal point. 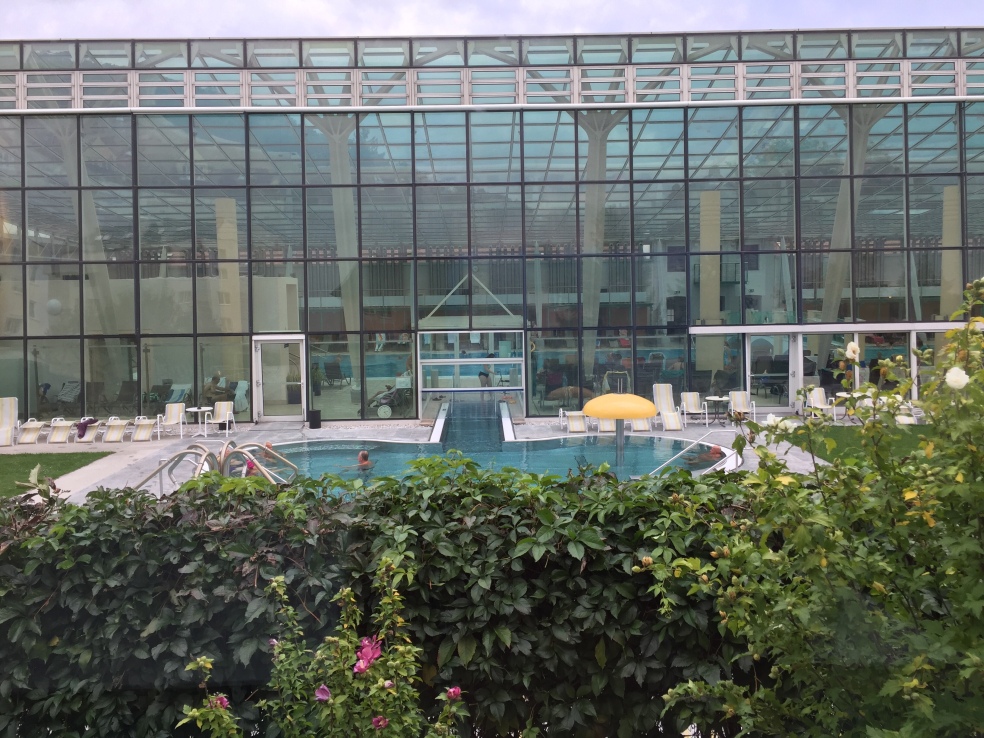 For me, however, the focal point was meeting a chef who then took me to his chef friend’s restaurant for lunch because I had to have what he called the best octopus stew in the world. It was amazing.

The two restaurants Wolfgang suggested were very different, but both casual and filled with locals. Neni is an Israeli/Middle Eastern restaurant in the Naschmarkt. I went at night and loved every bite.

Reinthaler Gasthaus is a place in the city center where locals and businessman congregate. Very basic local food but overhearing the conversations was a lot of fun. A group of local investment bankers who swapped out between speaking German and English were telling their colleagues about their recent trip to San Francisco and it was all I could do to not bust into the conversation. I held my tongue and as they paid their bill they commented, ” You know America is still a really nice place even if their president isn’t.” Their words, verbatim.

Wolfgang’s last suggestion of going to the Wachau was brilliant. This is the area that produces my favorite Austrian wine, the Gruner Veltliner. I had an amazing day in the valley, punctuated by seeing the Melk Abby, wine tasting in Dürnstein and sailing down the Danube and meeting a terrific couple from England who have traveled the world even though one of refuses to fly. Here’s me being happy in the Wachau Valley with the Danube behind me. I’ll stop there because that day deserves its own story. Until then, “Proust” to Wolfgang and to all of you. 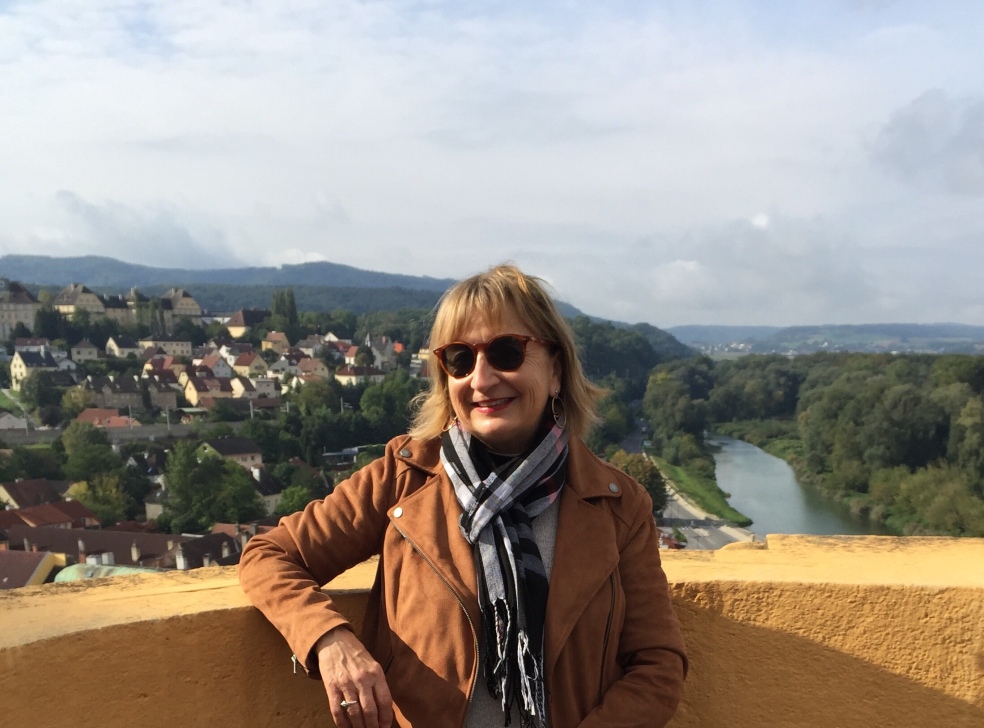 2 thoughts on “The best thing about the Hotel Sacher isn’t the torte…..my walk with Wolfgang Buchmann”