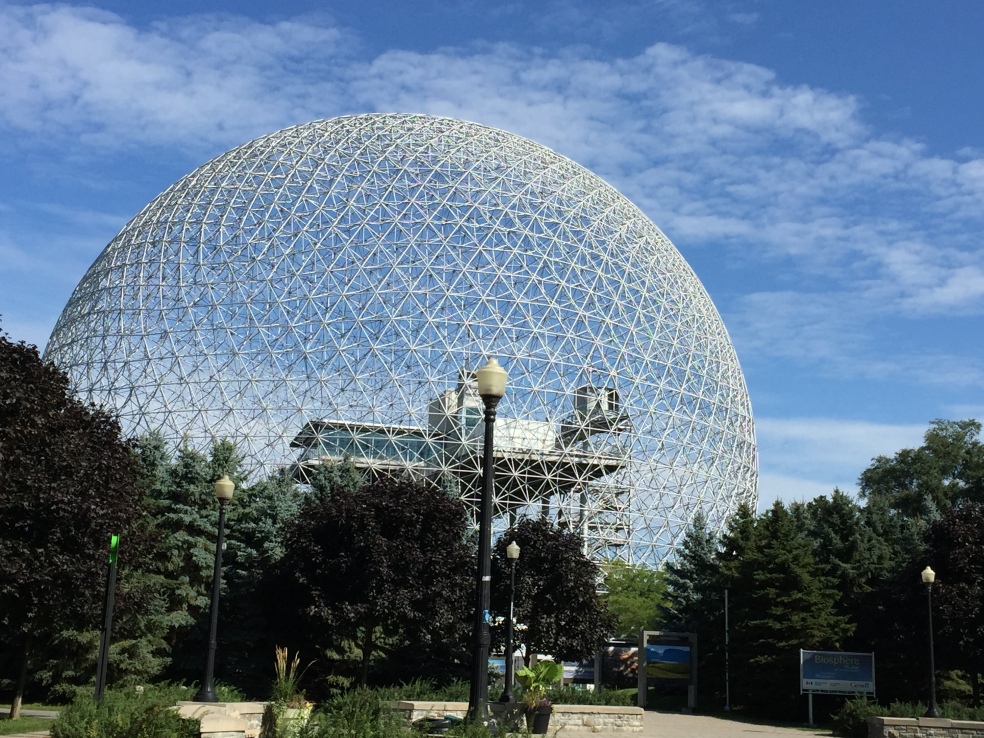 Feel free to read today’s post on an empty stomach as it contains no food descriptions or pictures. (But be warned…. the next post is all about food.)

So what do you do in Montreal if you aren’t at a restaurant or munching on croissants?  Today I went 10 miles on my bike and walked 26,000 steps in search of the answer to that question. I picked out my Bixi bike intending to ride over Pont Jacques-Cartier to the Île Sainte-Hélène. Being a mathematician and not an astute biker,  I biked straight for the bridge from my apartment  only to realize that I had intersected it at the center span and would need to go quite a distance to get to the entrance. But fortunately I could bike to a Metro stop nearby that would go there  and leave the bike. As I turned the corner, I saw this: 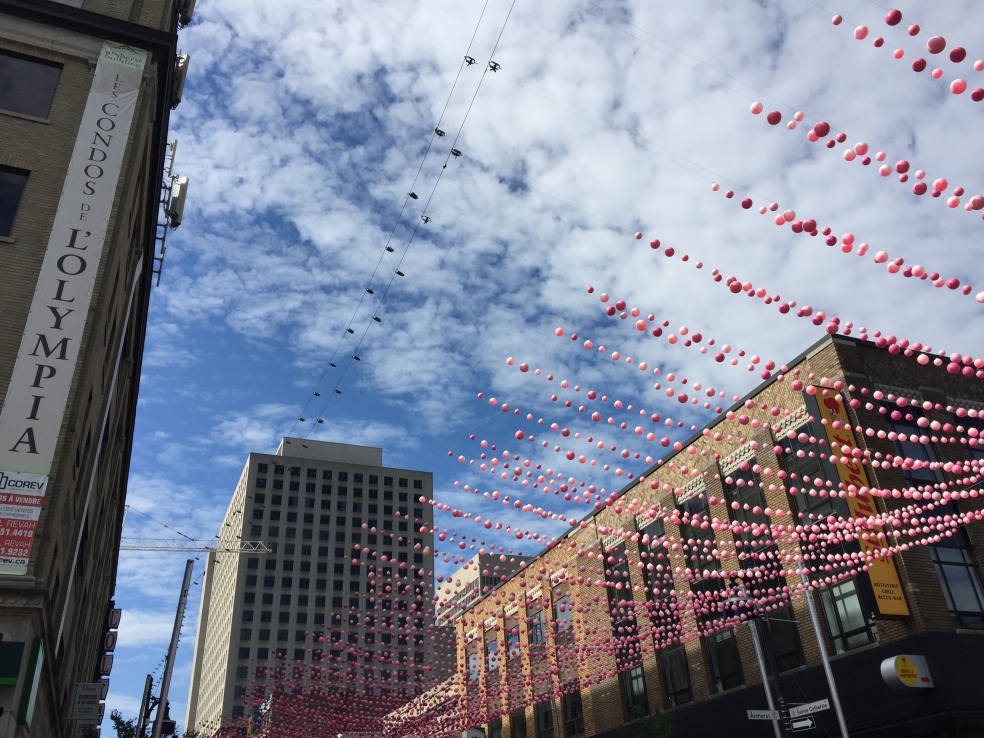 This is the Aires Libres art installation known as Le Projet de Boules Roses (comically referred to as “Pink Balls”). 200,000 balls in 5 shades of pink stung along Rue St. Catherine in the area known as Gay Village. It is intended to support the LGBT community and draw people to the area for shopping and restaurants. People were strolling around and having fun.

I hop the metro and take the yellow line under the water and emerge on the island. There right before my eyes I see peeking at me: 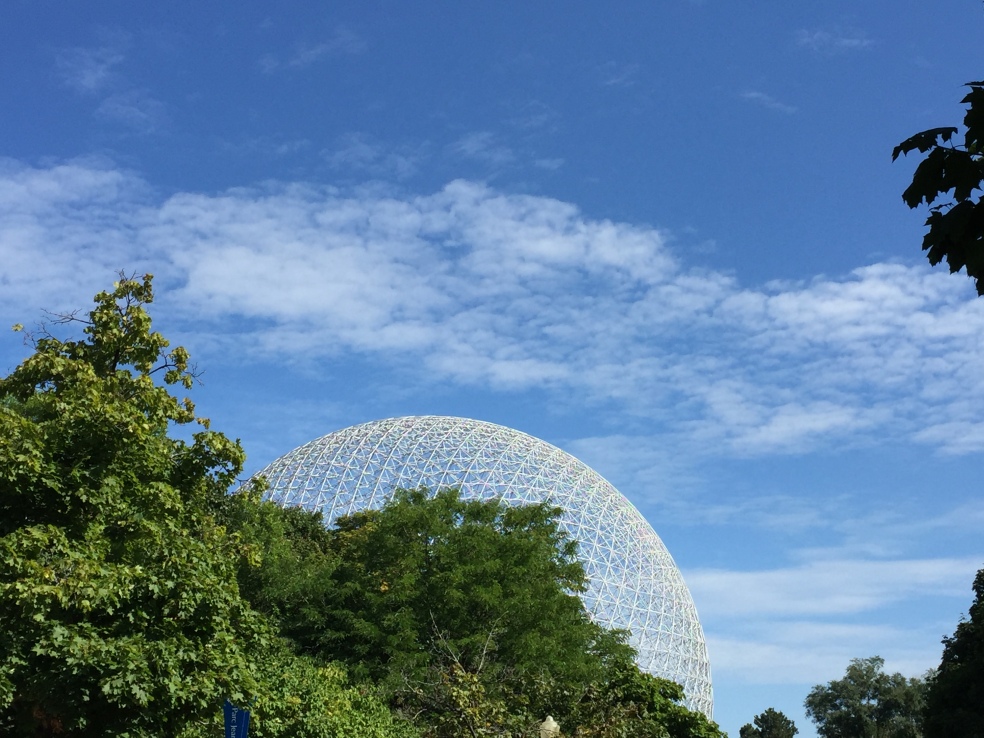 Hello there Biosphere! I remembered as a child (a very very young child) that the biosphere was built as the American Pavillion for the Expo 1967 held in Montreal.  It is so cool to see it up close and it now houses an environmental museum that as you go thru the temperature changes from tropical to frigid and in between. The Île is a beautiful park and  I walk around it until I see the striking Andrew Calder sculpture”Man”  (L’Hommme) that he created for Expo 67. I realize that I can see my apartment in the view across the river while standing at the sculpture. 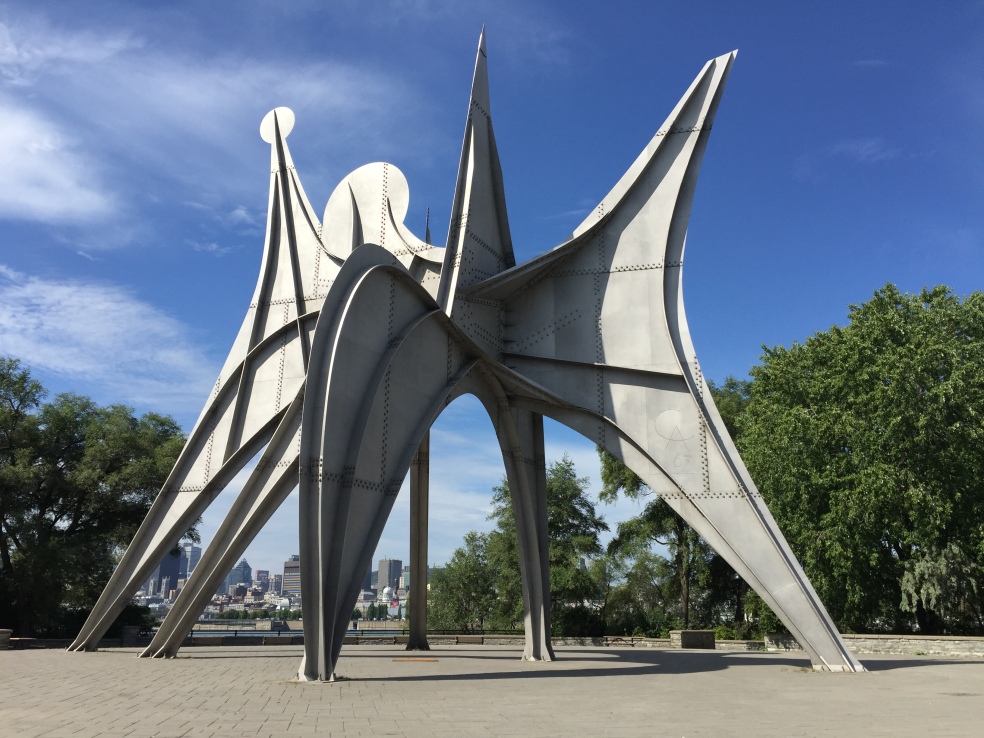 Time to rent another Bixi bike. It is so easy to hop on and off these bikes and walk or take the metro in between. The stands are everywhere. I ride over Pont du Cosmos to the Île Notre-Dame intending to circle that island and return my bike at the end. But the Grands Prix Cyclists is taking place today and some of the roads are blocked. I get almost to my return spot when I am turned back by an official. She tells me there is another Bixi stand up the road. I dutifully ride up and see this: 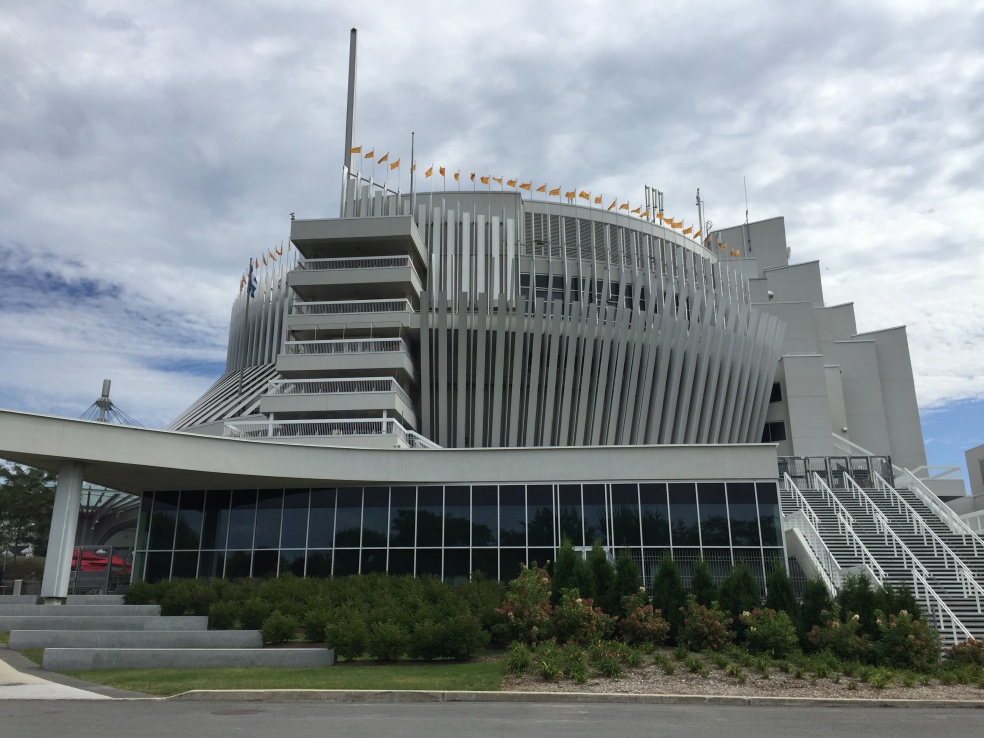 There is no one around and when another biker comes by I say–Pouvez s’il vous plaît dites-moi ce qui c’est? in my perfect French and he says “What?”  In his perfect English he explains that  it is the Casino–the former French Pavillion for Expo 67. I say it must be closed and he laughs. “It never closes! You are on the back side. Go around.” I do and it is like another world. Taxis are pulling up and loads of people are going in( I’m not going to judge their attire, but….).  There to the side is a Bixi stand. I put my bike in and decide to go inside. There are so many things wrong with this picture but I just had to take it. What is mainly wrong with this is not that I am in a casino all sweaty in my biking clothes but….. as so many of you know…..SHIRLEY DON’T DO CASINOS. Well at least it’s not in Vegas. I still have some integrity. 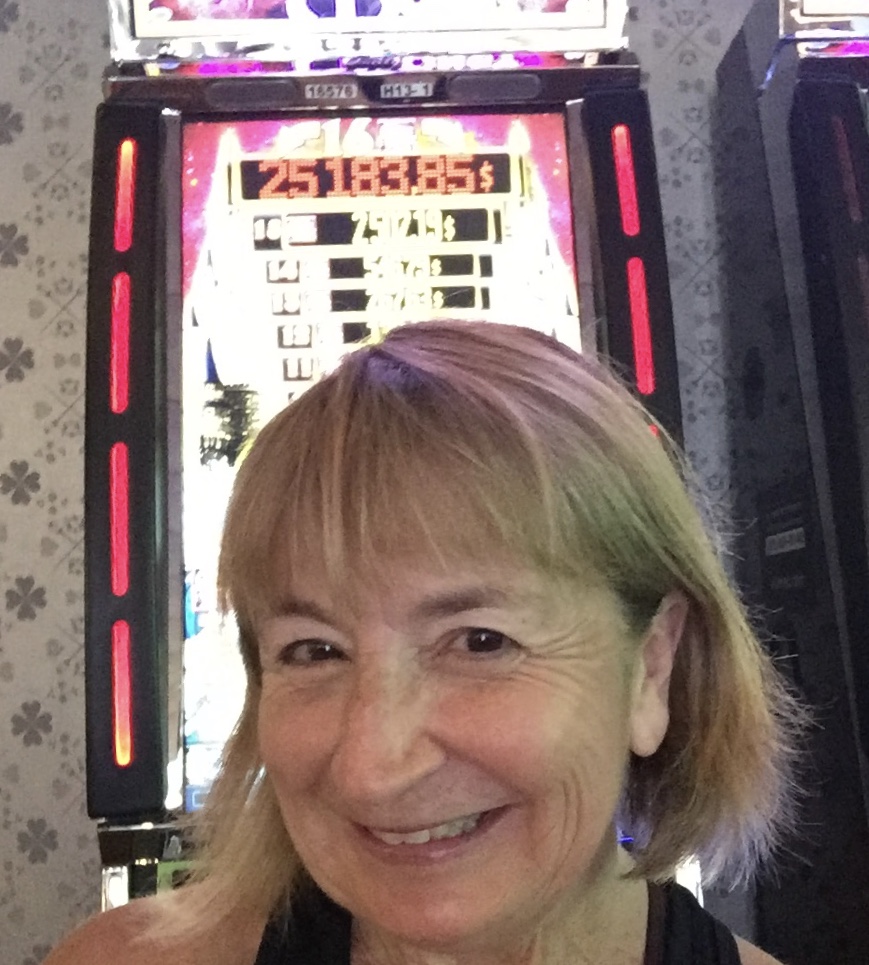 I meet a guy while taking this picture who asks how much I have won. I tell him I am not playing. He looks at me like I am crazy and tells me he just won $2,000 at the blackjack table. I tell him well then leave.  He once again looks at me like I’m crazy so I take my own advice and leave. Back on my bike for the  ride home but this time over Pont de la Concorde. I think I am getting the hang of this when I realize I have missed the bike lane and am now about to merge with a zillion cars. I stop and see that the bike lane is shut off by a tall barrier. I am frozen and then a man yells to me from his bike that he would lift my bike over the barrier. And he does! Canadian men are very nice…and very strong.

I am riding along when I realize I am about to pass Habitat 67, a model housing complex built for Expo 67 and now is considered a very desirable place to live. It is 354 identical cubes made of  prefabricated concrete. Originally the cubes were combined in different numbers to create apartments and as the years progressed apartments have been merged and some are 12 stories high. 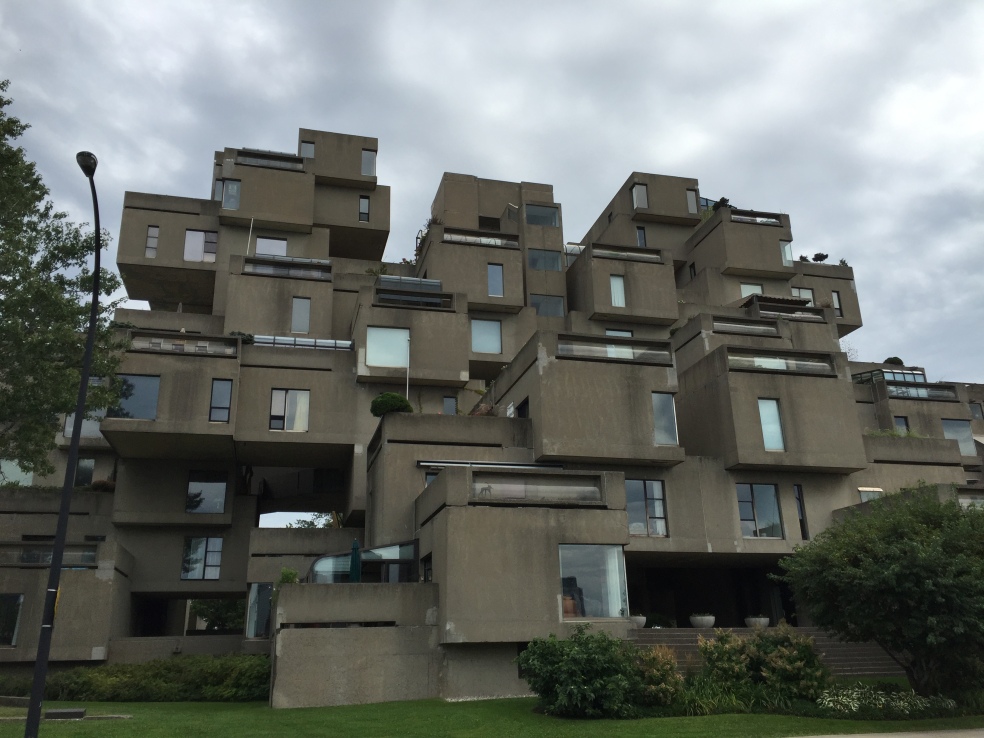 I make it back to the Old Port and stop for a sandwich by the water where I talk with Alin, an accountant from Laval. He makes a great effort to speak English as he really isn’t fluent and I so appreciate his effort. Once home I shower and go out for mass at Notre-Dame-de-Bon-Secours Chapel, lovely stone church erected in 1675. 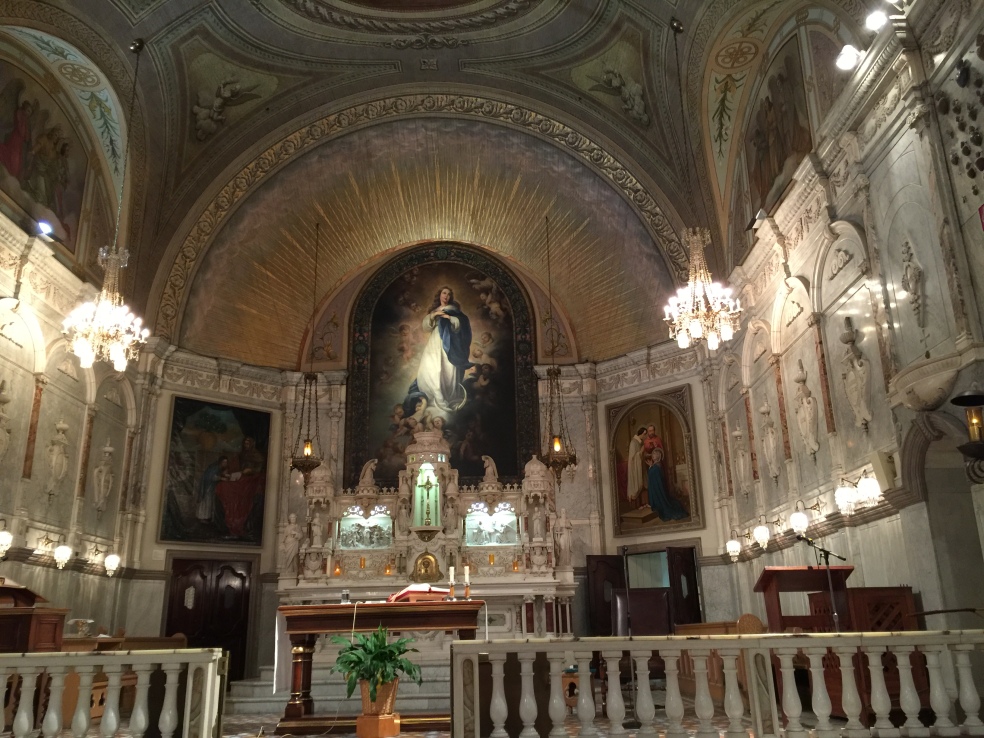 Walking home I pass the store that I took pictures of the other night when a wedding was going on there. I went in and the mother of the bride, Dominique was there.  She is lovely and we had a great chat and it turns out she is my neighbor here on my street. The store’s name is Room Service. 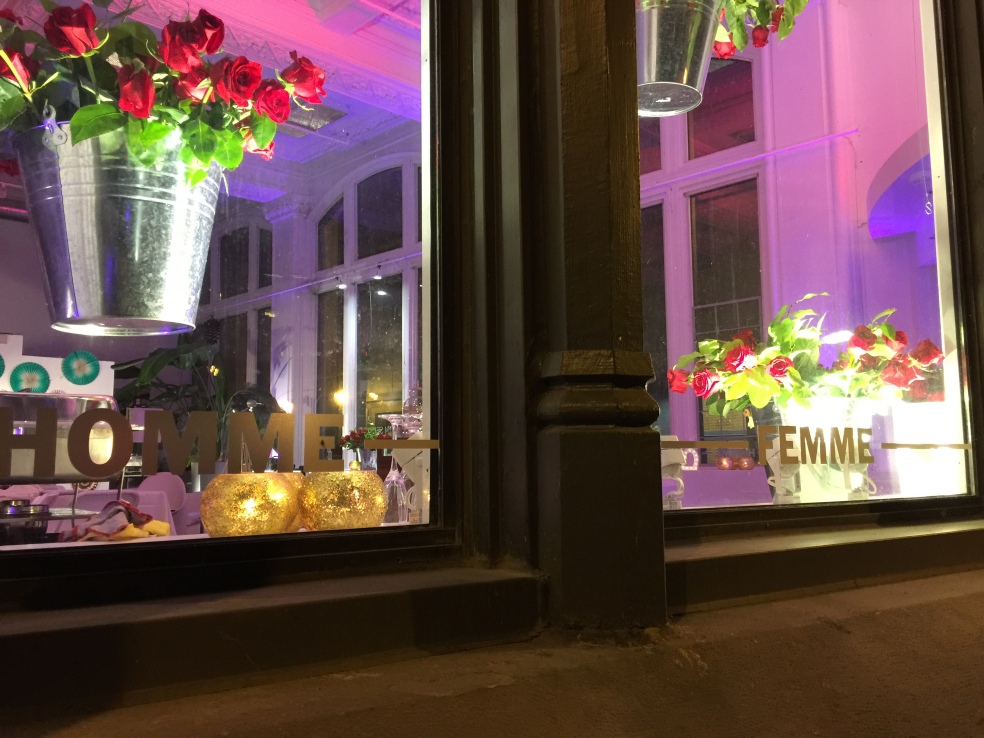 My last excursion for today is to go out to Olympic Park at night and see the lit botanical gardens. It takes two Metro lines to get there but it is worth it. The Japanese garden was my favorite. 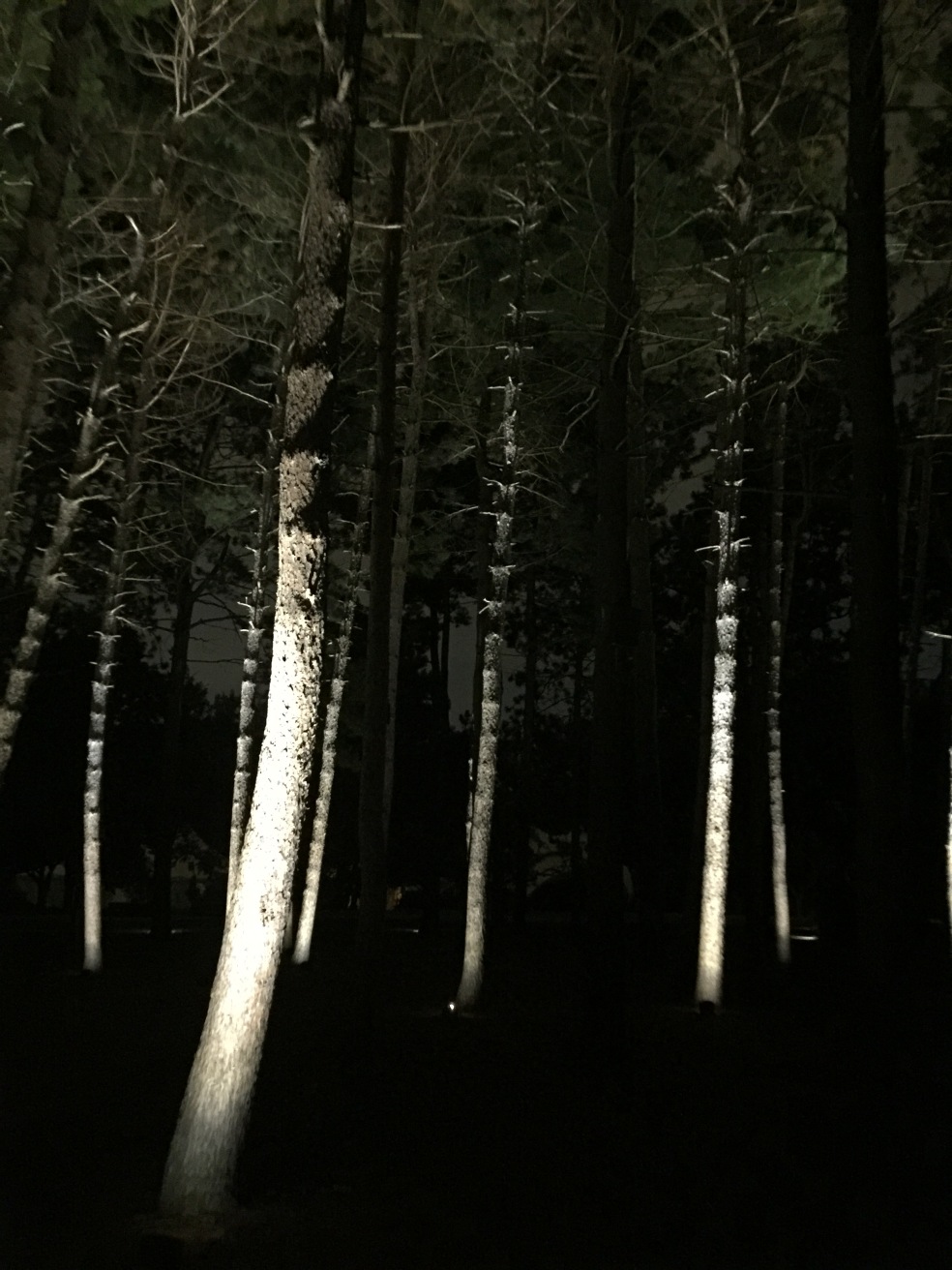 I get a few dumplings at the stand in the park, reverse the ride and walk home from Place des Armes. And that is a non food-related Montreal day. Next up…food, glorious food.